NALSC Restorative Justice Initiative is a pilot project funded by the Ministry of the Attorney General for Sexual Assault and Domestic Violence. The intent is to complete training in facilitating Restorative Justice Circle with an emphasis on sexual abuse and domestic violence cases.

Needs Of The Community

When looking at this area some communities have identified specific needs that they would like to see occur in the area of Sexual Abuse & Domestic Violence.

Restorative Justice is a voluntary process involving the person who has been harmed, the person who has caused the harm and their supporters. With the intent being to bring them together to talk about what happened, who was affected and what can be done to help repair the harm. 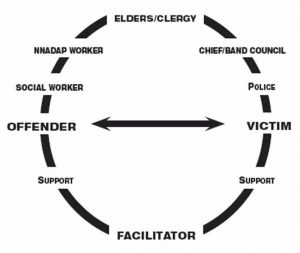 For sexual assault survivors, restorative justice may offer an alternative to the current broken system which focuses on the punishment and not the repairing.

When trauma is not dealt with in the community, it continues to grow if not treated. It affects everyone involved, including the community, and in turn continues to promote fear and helplessness, most times the most common way to cope is by ignoring the trauma altogether.

It is the hope that the sexual assault and domestic violence referral and intake process will help in educating other NALSC restorative justice workers on how to proceed with these cases, and begin working with sexual assault cases referrals to their program.

Steps Through The Process

As with any program there are steps that guide an individual towards their desired goal, this program takes to heart the needs of the victim or offender to ensure the healing process can be completed.

The process for being involved in this program is as follows:

For more information  please click below for our Brochures in English as well as Cree.