On Saturday, July 16, 2022, Balmertown-based Nishnawbe-Aski Legal Services Corporation (NALSC) Restorative Justice worker, Shirley Keesic, and Red Lake-based NALSC Gladue Writer, Leslie King, set up an information booth at the 2022 Red Lake Norseman Festival. The NASLC booth, along with a good number of other booths were set up in the beautiful green space which was named in honour of one of Red Lake’s former beloved mayors – Phillip Thomas Vinet Centennial Park.

Against the backdrop of bouncy castles, an entertainment mainstage (individual performers and musical acts) other vendors, a “Norseman train”, aerial acrobatics, and a slo-pitch tournament, NALSC received in excess of 80 visitors at its tent. Shirley and Leslie distributed scores of NALSC promotional items while also informing visitors of the work they and other NALSC workers do. Visitor’s names were also entered into four separate draws and the draws took place on Monday, July 18, 2022, and the prizes were picked up by the four winners on the same day.

Saturday, July 16, 2022, was a very hot sunny day, but many Red Lake-area residents attended the festivities despite the heat. A notable out-of-town visitor was Ontario New Democratic Party, Member of Provincial Parliament, Sol Mamakwa, who stopped by the NALSC tent and included Shirley and Leslie in a Facebook live video. A link to MPP Mamakwa’s Facebook live video is below.

Shirley and Leslie enjoyed interacting with members of the public during their one-day information booth at the 2022 Red Lake Norseman Festival and look forward to collaborating again in the future at other similar events. 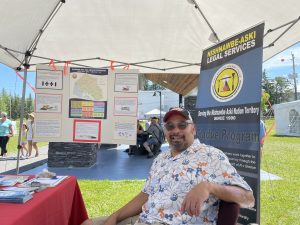 Until next time, enjoy the summer weather.